‘Dwellings built specifically for those on incomes that deny them the opportunity to purchase or rent on the open market’ (Pacione, 2009, p.196)

‘The Central Provident Fund (CPF) is a comprehensive social security system that enables working Singapore Citizens and Permanent Residents to set aside funds for retirement. It also addresses healthcare, home ownership, family protection and asset enhancement.’ The savings plan for working Singaporeans and permanent residents primarily to fund their retirement, healthcare, and housing needs. The CPF is an employment based savings scheme with employers and employees contributing a mandated amount to the Fund. (Central Provident Fund Board, 2019)

‘The debt-to-income (DTI) ratio is a personal finance measure that compares an individual’s debt payment to his or her overall income.’ The debt-to-income ratio is one way lenders, including mortgage lenders, measure an individual’s ability to manage monthly payment and repay debts. DTI is calculated by dividing total recurring monthly debt by gross monthly income, and it is expressed as a percentage.’ (Murphy, 2019)

‘The DiPasquale-Wheaton model, uses one demand curve and

two supply curves, in addition to the relation of rental to asset price through the cap rate and the relation between the quantity of newly constructed stock and the existing stock through the depreciation rate.’ (DeSalvo, 2017, p.7) 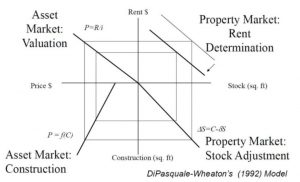 ‘Green building is a practice of reducing the environmental impact of buildings and enhancing the health and wellbeing of building occupants by:

A subsidized-sale housing programme managed by the Hong Kong Housing Authority. It was instituted in the late 1970s as part of the government policy for public housing with two aims - to encourage better-off tenants of rental flats to vacate those flats for re-allocation to families in greater housing need; and also to provide an opportunity for home ownership to families unable to afford to buy in the private sector. (Home Ownership Scheme, n.d.)

‘A housing bubble is a hike in housing prices fueled by demand, speculation and exuberance. Housing bubbles usually start with an increase in demand, in the face of limited supply, which takes a relatively extended period to replenish and increase. Speculators enter the market, further driving up demand. At some point, demand decreases or stagnates at the same time supply increases, resulting in a sharp drop in prices — and the bubble bursts.’ (Kenton, 2019)

‘The housing policy environment is the set of government interventions that have a critical and measurable effect on the performance of the housing sector.’ (Angel, 2000, p.11)

‘The Chinese government has designed the Housing Provident Fund to help middle and low-income workers meet their housing needs. When employers fail to contribute, workers are denied the funds they are due to help them with the rent, maintenance, or purchase of their home. For this reason, the FLA expects that affiliated companies sourcing from China require full payment of Housing Provident Fund contributions.’ (Fair Labour Association, 2015) 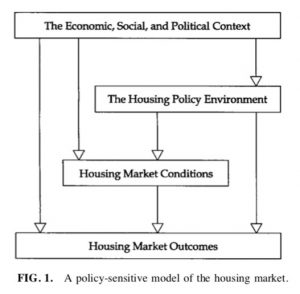 ‘Under the Housing Subsidy Policy, households who have been living in public rental housing or interim housing for 10 years or more are required to declare household income biennially.’ (Information Services Department, 2008)

‘Inflation is a quantitative measure of the rate at which the average price level of a basket of selected goods and services in an economy increases over a period of time. It is the constant rise in the general level of prices where a unit of currency buys less than it did in prior periods. Often expressed as a percentage, inflation indicates a decrease in the purchasing power of a nation’s currency.’ (Chen, 2019)

‘The Linked Exchange Rate System was established in 1983. It is in essence a Currency Board system, which requires both the stock and the flow of the Monetary Base to be fully backed by foreign reserves. Any change in the size of the Monetary Base has to be fully matched by a corresponding change in the foreign reserves.’ (Hong Kong Monetary Authority, 2018)

‘Loan-to-value (LTV) ratio is an assessment of lending risk which financial institutions and other lenders examine before approving a mortgage. Typically, assessments with high LTV ratios are higher risk and, therefore, if the mortgage is approved, the loan costs the borrower more. Additionally, a loan with a high LTV ratio may require the borrower to purchase mortgage insurance to offset the risk to the lender.’ (Hayes, 2019)

‘Obtaining a pre-sale distribution agreement is one of the best ways of getting financing for the picture. This is an effective financing tool, because the foreign distribution agreement is a form of security for investors.  The filmmaker is generally required, as a condition of the pre-sale agreement, to obtain a completion bond (an insurance policy covering the cost of completing the film if the filmmaker is unable to do so).’ (HRBEK Law, 2019)

Property cycle can be divided into 4 phases:

‘Public housing is a form of long-term rental social housing in Hong Kong and other markets.’ (HousingVic, 2018)

‘A subprime mortgage is a type of loan granted to individuals with poor credit scores (640 or less, and often below 600), who, as a result of their deficient credit histories, would not be able to qualify for conventional mortgages. Because subprime borrowers present a higher risk for lenders, subprime mortgages usually charge interest rates above the prime lending rate.’ (Heyford, 2019)

‘The Tenants Purchase Scheme (TPS) was introduced by the Housing Authority's (HA) in 1998. In 2002, the Government reviewed its overall housing policy. In support of the Government's repositioned housing policy, the HA terminated the TPS after the sale of TPS Phase 6B in 2005 / 2006. According to prevailing policy, tenants in the existing TPS estates can still opt to purchase their flats.’ (Hong Kong Housing Authority, 2019)

The Tragedy of Commons

1. ‘The tragedy of the commons is an economic problem in which every individual has an incentive to consume a resource at the expense of every other individual with no way to exclude anyone from consuming. It results in overconsumption, under investment, and ultimately depletion of the resource. As the demand for the resource overwhelms the supply, every individual who consumes an additional unit directly harms others who can no longer enjoy the benefits. Generally, the resource of interest is easily available to all individuals; the tragedy of the commons occurs when individuals neglect the well-being of society in the pursuit of personal gain.’ (Chappelow, 2019)

Too big to fail

‘"Too big to fail" describes a concept in which the government will intervene in situations where a business has become so deeply ingrained in the functionality of an economy that its failure would be disastrous to the economy at large. If such a company fails, it would likely have a catastrophic ripple effect throughout the economy. The failure may cause problems with companies which rely on the failing company's business as a customer as well as problems with unemployment as workers lose their jobs. Conceptually, in these situations, the government will consider the costs of a bailout in comparison to the costs of allowing economic failure in a decision to allocate funds for help.’ (Young, 2019)

Chappelow, J. (2019). Tragedy Of The Commons. In Investopedia. Retrieved from https://www.investopedia.com/terms/t/tragedy-of-the-commons.asp

Davy, B. (2012). Land Policy: Planning and the Spatial Consequences of Property. England: Ashgate. Retrieved from https://books.google.com.hk/books?id=jpkKrtrBALIC&pg=PA12&lpg=PA12&dq=Acting+according+only+to+their+own+rationality,+each+one+of+the+three+actors+fails+as+a+policymaker.+This+is+tragic&source=bl&ots=m3jFUZQ2P4&sig=ACfU3U3ZBJ__YRQEmxlQnlZoSLllqBE8wg&hl=zh-TW&sa=X&ved=2ahUKEwi3j9fmmeniAhUDEqYKHXj0CpkQ6AEwBnoECAYQAQ#v=onepage&q=Acting%20according%20only%20to%20their%20own%20rationality%2C%20each%20one%20of%20the%20three%20actors%20fails%20as%20a%20policymaker.%20This%20is%20tragic&f=false

HRBEK Law. (2019). What is a Pre-Sale Agreement? Retrieved from https://www.hrbeklaw.com/what-is-a-pre-sale-agreement.html

Heyford, S.C. (2019). The Risk of Subprime Mortgage by a New Name. In Investopedia. Retrieved from https://www.investopedia.com/ask/answers/07/subprime-mortgage.asp

Young, J. (2019). Too Big To Fail. In Investopedia. Retrieved from https://www.investopedia.com/terms/t/too-big-to-fail.asp